Ruff weekend – but peace of mind.

Posted on November 27, 2017 by sebastiandoodle

As you might have seen on the forums, I had a ruff weekend – first my Miami Hurricanes lost. That was tough, we were so close to finishing undefeated, but I’m going to fight this cancer so I can watch them win it all next season.

Anyway, after that debacle, I woke up Saturday morning and my owner took me in to the vet since I was bleeding. It didn’t faze me too much, but my pawrents were a little nervous. I liked meeting a bunch of new people.

I spent the rest of the weekend chilling out – it was so nice out, but since I now have staples in again, I have to watch my activity level.

Today everyone had to go back to work/school, so it’s just me and my sister Mojo just hanging out. Anyway, my pawrents can keep their eye on me using their Arlo Q wireless cameras they have setup. They bought 4 of them and have them strategically placed downstairs so they can see me where ever I go downstairs. Most of the time, I’m in the front room looking out the window, waiting for them to come back! lol.

Anyway, I’m not a spokesperson for Arlo, but my pawrents got them on sale at Best Buy for $129/each (regularly priced between 179-199/each). My pawrents say they have a little peace of mind when they have to work.

Here’s another quick pic of me and my sister on Friday before the infection hit.

Til next time – ruff, ruff! 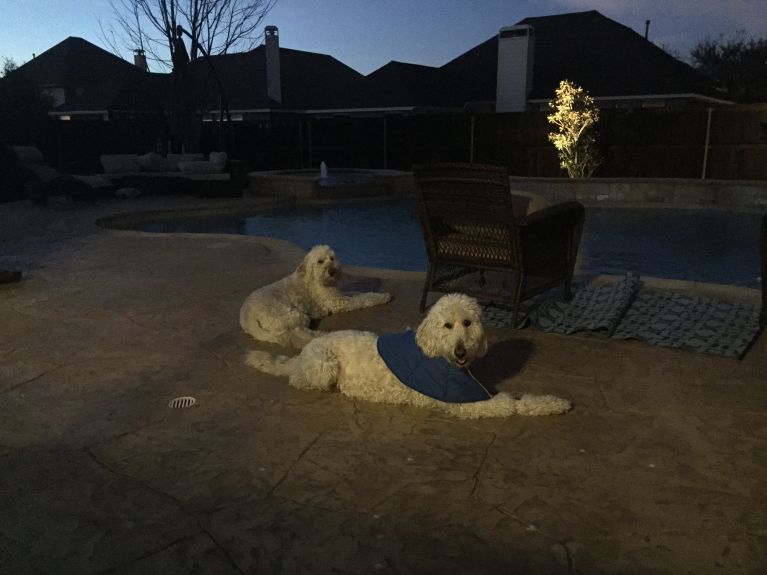 This entry was posted in Uncategorized. Bookmark the permalink.

2 Responses to Ruff weekend – but peace of mind.

Sebastian the Golden Doodle dood is brought to you by Tripawds.
HOME » NEWS » BLOGS » FORUMS » CHAT » YOUR PRIVACY » RANDOM BLOG